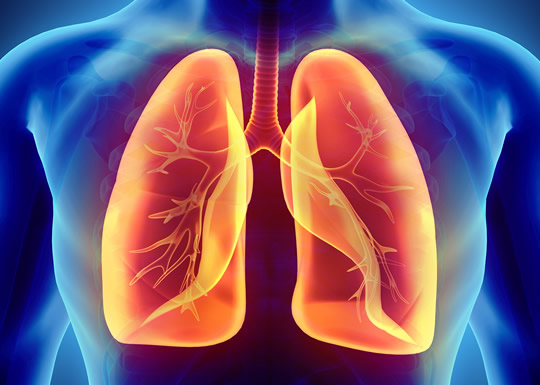 Lung Cancer
Introduction
A pair of air-filled, spongy looking organs situated on either side of thoracic or chest cavity are called lungs. Through windpipe (trachea) and its tubular branches (bronchi), inhaled air is conducted into the lungs. The bronchi are divided into several small and smaller bronchioles.
Bronchioles form microscopic air pouches called alveoli where oxygen from the inhaled air gets absorbed in the bloodstream. A thin layer of cells called interstitium are present between alveoli that are responsible for providing support to the alveoli and its function.  A thin layer of tissues covers the lungs, which is called pleura. It helps the lungs to expand and also provide lubricant.
Function of Lungs
The primary role of the lungs is to take in the inhaled air and then pass oxygen into the bloodstream. From blood, purified oxygen can be circulated throughout the body parts.
In order to breath, muscles of the diaphragm, abdomen, neck, and muscles between the ribs (intercostal muscles) are required. When these muscles contract, they move in the downward position and enhance the capacity of the lungs to inflate. When the volume of chest cavity heightens, the inside pressure drops down, and the air gets sucked in by the help of the nose/mouth.
When the diaphragm and other muscles relax, the volume of lungs declines and the pressure inside goes up again, leading to the expulsion of air into the atmosphere. When the lungs are compressed, a waste product in the form of carbon dioxide is also pushed out during exhalation.
When air enters the respiratory system, it is either through nose or mouth. Once entered, it also goes through the trachea (the windpipe). After passing through the trachea, it enters the carina (section), where the windpipe divides into two bronchi. One bronchus leads to the right lung while the other bronchi lead to the left lung. From here on, the pipe like bronchi forms further bronchi and even smaller bronchioles. This entire system finally terminates at alveoli, where the exchange of gas occurs.
Symptoms of Lung Cancer
Early Signs and Symptoms
Most of the time, no symptoms appear until the disease has reached its advanced stage. Because lungs are a very delicate organ and have very few nerve endings.

Advanced Signs and Symptoms
Advanced symptoms appear when cancer has already progressed towards other parts of the body. They may affect the brain, liver, and bones.
The advanced symptoms of lung cancer include:

Non-Small and Small Cell Lung Cancer Symptoms
NSCLC is a type of lung cancer that develops very slowly until the symptoms start to show.

The stages of NSCLC can be defined very well through a TNM classification, i.e., T (tumor size and location), N (number of adjacent lymph nodes that are affected) and M (metastasis).

In the 1st  stage, cancer can be found in the lung but has not spread outside of it.

Cancer is present in the lungs, the adjacent lymph nodes, and the center part of the chest cavity.

In this stage, there is severe proliferation and, cancer has spread within the entire body and organs.
Small Cell Lung Cancer
SCLC can be divided into two categories, i.e.:

In this stage, the cancer is only located at one side of the chest cavity

This stage is where cancer cells have spread to the opposite side of the body as well.
Diagnosis of Lung Cancer

A chest X-ray is performed to get a clear image of your lungs. Through this method, the doctors can reveal any sort of nodule and abnormal mass present within the chest cavity.

A CT scan can be used to take a close look at small lesions present in the lungs that remained undetected with an X-ray.

The sputum produced during coughing is collected for lab tests. After the sample is taken, the sputum is studied under a microscope to understand if the cancer cells are present or not.

A procedure called biopsy is performed to collect samples of abnormal cells. This procedure can be done in a variety of ways such as bronchoscopy. (abnormal cells are studied through a tube inserted from throat to lungs), mediastinoscopy (a cut is made at the back of the neck, and sample tissues are taken from lymph nodes by the help of advanced surgical tools) and needle biopsy (CT images and X-ray is used to pierce a needle through the chest into the lung tissues).

How to Prevent Lung Cancer

If you smoke regularly, the best thing to avoid a lung cancer condition is to quit. Every day that a person doesn’t smoke decreases your chances of having this life-threatening sickness. Consulting a doctor and finding out your option about leaving is highly recommended.

Many studies have proven that including high fiber and low-fat diet regimen in your daily routine can decrease the chances of developing lung cancer. Moreover, having at least four or five portions per day of fresh vegetables and fruits with whole grain items can also help you beat cancer.

There is no significant evidence about the importance of exercise in lung cancer prevention.  However, regular exercise can keep you healthy and away from all the possible triggers that can initiate the growth of cancer-causing cells in the body. Try to take a brisk walk, yoga class, and meditation classes to lower your risk of getting lung cancer.

At SAMBHAV CLINIC believes in treating a disease holistically. We believe healing the body by finding the cause and correcting the cause, doing lifestyle changes, doing detoxification of the body to heal from the disease itself. We strongly believe in the truth" FOOD IS THE MEDICINE "