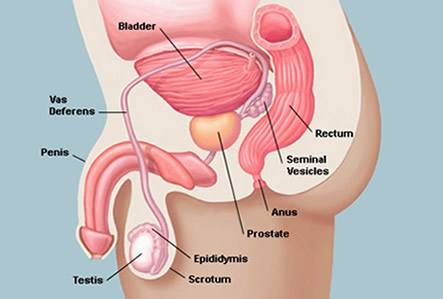 Prostate Cancer
What Is Prostate?
A muscular and apricot sized gland that is situated in the middle of the bladder and the penis is called the prostate. The prostate is located in the front part of the rectum. Halfway through the prostate, the urethra is present and runs from this gland and the bladder through the penis and let urine excrete out of the body.
The prostate is responsible for secreting out some fluids that help in the nourishment as well as the protection of sperm cells, when a person ejaculates, the prostate squash this fluid into the urethra after which it is expelled out along with sperms in the form of semen.
The prostate can be split into four zones, i.e., anterior fibromuscular zone (made out of fibers and muscles), peripheral zone (present at the back of the gland and contains a high amount of glandular tissues), central zone (present around ejaculatory ducts) and transition zone (surrounds the urethra).
Function of Prostate
The prostate gland is considered as a part of a male reproductive system whose most important role is to discharge prostate fluid (that makes semen). The muscles of this gland can help during ejaculation by impelling the seminal fluid in the urethra.
During ejaculation, millions of sperm cells move towards testes by the help of a tube called vas deference. When it happens, the prostate muscles contract and close the opening that is present amidst urethra and bladder. It leads to the discharge of fluid in the urethra, formation of semen and then pushing out of that semen through.
This fluid, which is secreted by the prostate, makes up more than one-third of the entire semen volume and holds many enzymes and elements such as citric acid and zinc. The seminal fluid is a little alkaline in nature due to which it can easily increase the lifespan of sperms. Another most essential component of prostate fluid is an enzyme called PSA, i.e., Prostate-Specific Antigen, which also helps in guarding the sperms through liquefaction of semen so they can easily swim after ejaculation.
Symptoms of Prostate Cancer
Early Symptoms
Depending upon the location of the prostate gland and its association towards urethra and bladder, prostate cancer is complemented by multiple types of urine symptoms, particularly during the early stages.
The most common early symptoms of prostate cancer are:

Advanced Symptoms
When prostate cancer spread or metastasize, the tumors may spread to the nearby bones and organs. If the cancer cell reaches the spine, it can cause pressure on spinal nerves. The advanced signs and symptoms of prostate cancer are:

Stages of Prostate Cancer
Prostate Cancer Grading
The Gleason system is utilized to grade prostate cancer from 1-5 according to the pattern of cells found in the obtained tissue sample:

TNM System for Staging Prostate Cancer
To describe the stages of prostate cancer, doctors use the TNM system to determine various aspects of tumor spread and growth.

Four Stages
Stage I
The cancer cells are only present in the prostate. The doctors are not able to see a tumor during a digital rectal examination or any other imaging tests like CT scan or X-ray. The Gleason score is 6, and the PSA level is less than 10.
Stage II

How to Diagnose Prostate Cancer
DRE (Digital Rectal Exam)
During this procedure, a well-lubricated and gloved finger is inserted in the rectal opening for prostate examination. If the doctor feels like there is any mutilation in texture, shape, and size of the gland, further tests will be performed.
PSA Test (Prostate-Specific Antigen)
Blood samples are taken for the analyzation of PSA (a substance secreted from the prostate gland). Lower levels show no abnormality, but high levels may indicate inflammation, prostate enlargement, cancer or infection.
Ultrasound
A doctor can ask you for a transrectal ultrasound where a small probe (similar to the shape of a cigar) is inserted in the rectum, and sound waves are used to illustrate the gland.
How to Prevent Prostate Cancer
A Low Fat Diet
Foods that are abundant in fats such as oil, dairy products, meat, nuts, and milk should be avoided to reduce the risk of prostate cancer. Avoiding these foods has other benefits like maintained weight and improved heart functioning.
More fruits and vegetables in the diet
Vegetables and fruits have a high amount of vitamins, minerals, and other significant nutrients that are considered to reduce the risk of prostate cancer. Though there is no certain proof against a particular nutrient, studies have shown that by eating more fruits and vegetables, you will have less room in your stomach for other high-fat foods.

Maintain Healthy Weight
Men who are fat/obese and have a BMI of 30 or high are at an increased risk of prostate cancer. Maintaining a healthy weight and reducing the number of calorie intake is very important to stay away from a cancer-causing situation.
Regular Exercise
Men who exercise at least two or three times a week have a low risk of prostate or any other type of cancer.

At SAMBHAV CLINIC believes in treating a disease holistically. We believe healing the body by finding the cause and correcting the cause, doing lifestyle changes, doing detoxification of the body to heal from the disease itself. We strongly believe in the truth" FOOD IS THE MEDICINE ".